A Plantation on a Bicycle 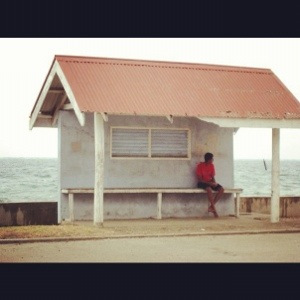 The light padded in to the bure, creeping softly between the sleeping shadows, awakening them gently. Outside there was a scritching and cracking, as Papa straightened his bicycle in several places, and stretched it out between his short legs. On the front and the back of the bicycle were things to sell, short rubbery green stems, purple packed bunches of colour and wide leaves that flapped about like soft, old skin.

Papa bought wood from the money he made out of selling vegetables from the plantation.

The tiny squares of the mosquito netting formed a grid through which she could examine the preparations taking place, each little square containing a blurred block of crowded colour that shifted among the bouncing baskets being tethered to the handlebars. Her legs were fine boned, and tightly muscled, from the long walks uphill, twice a day, to the plantation. She stretched them out along the mat, the heat already softening the cooler ends of her sleeping mat, kneading them into a wheaty flatbread that dug into the creases at the back of her heels. Feet, flattened and spread against days and nights of long, hot roads, waved about at the end of her legs. They moved slowly, side to side, while her mind crawled out of sleep.

‘Galo’, she would hear, discreetly or thrown out into the open, and she would feel the brittle wash of watching whispers poke and prod at her heart. Luke would walk or cycle, solid legs pumping along the dirt road, past the spread of jungle grass that beached itself between houses, forming, from a distance, little English lawns. Stopping every now and again on his way back to the house, he would look out for old tyres, pieces of wood, anything that could find itself a new life in the hands of a new owner. His eyes were tweezered shut at the far corners, initially from birth, and then from a lifetime of blue light bouncing off ocean.

The road was straight, broad, and the houses wrapped around the pools of darkness afforded by the tall trees and thick grassy undergrowth keeping the foundations of the wooden houses cool. The overhead mountains smoothed themselves down between the trees and into the shadow of the houses, shadows which climbed into windows and poured itself into doorways. Every now and again, someone would materialise from the darkened doorways as if they had always been there, and they would watch. Sometimes if the front lawn was shallower, he would pass by, within speaking distance, of figures hung with floral print dresses, lazy necked t-shirts and sometimes, a pre-squashed jandal kicked over the end of a verandah. He would feel, loud and clear, the weirdness of his straight spikey hair, the confidence of approaching a piece of rubbish, the name, ‘Galo’ afforded him by walking the roads alone.

It is never an easy matter, to be ‘different’. When it comes to schooling, the development, implementation and evaluation of a national curriculum assumes, creates and defines, at every stage, a common culture, within which there is the acknowledgment of what difference and diversity can contribute to an overriding commonality. When considering culture and curriculum, and the meanings of these two terms, these are terms that are defined differently by different people, depending on who they are and where they come from. Tongan poet and researcher, Konai Thaman (1993, p.249)acknowledges also, “that concepts of culture and curriculum often have Western connotations that can be problematic in the contexts of the worldviews of most of the indigenous peoples of the Pacific Islands.”

Simply speaking, the formal education system can be understood as a method for the transmission of culture, and the curriculum, as defined by Lawton,
“as a selection from the culture of a society, of aspects which are regarded as so valuable that their survival is not left to chance, but is entrusted to teachers for expert transmission to the young (Lawton, 1975, p. 9).”

Within our diverse Pacific societies and cultures, how do we define difference amongst ourselves? Who gets to decide, for instance, that a Chinese man, raised in the Fijian language by the French missionaries, does or doesn’t have as much of a place as others, to determine what it is about his Fijian identity that should be part of what is passed on?

We have our own ways of including and excluding, that which is inside and outside of what we define to be ‘us’ and indeed, what we even mean by ‘us’. Of those that select aspects of our cultures that are to be passed on, in implementating a national curriculum, important questions must be asked. Who has the power to decide what commonalities and compromises we are seeking to make across New Zealand and Pacific cultures, and what commonalities are we are seeking amongst ourselves as Pacific Peoples? Just how are we defining these commonalities, whatever they are, and at what cost?